Turkish Prime Minister Recep Tayyip Erdogan had a lot of issues to address during his three-day visit to Ukraine this month, and it seems that he did quite well.  In fact, the progress Turkey and Ukraine have achieved in the past two years shows that a golden era has started in our relationship.  Erdogan’s visit was preceded by a number of achievements, which included mutual visa exemptions for travelers, which took effect Aug. 1, increased travel between the nations and the number of flights and establishment of a high-level bilateral strategic council.

Erdogan took the relationship further. Along with President Viktor Yanukovych, he presided over this council, in which representatives of foreign, transportation, defense and energy and economy ministries took part. The duo also opened the Yalta European Strategy forum in Crimea, known as the Davos of Ukraine.  Erdogan was the  honorary guest of this year’s meeting.

When this visit was determined, the topics of the discussions were defined as followings,

1- To define the road map for the increasing of the reciprocal foreign trade volume up to 20 billion US Dollars until year 2015. (The existing foreign trade volume is 6.5 billion dollars according to the statistics of year 2011.)
2- To accelerate the necessary preparations for Free Trade Agreement which is expected to be signed till the end of this year. This is the most vital matter in order to reach 20 billion dollars of foreign trade volume.
3- To improve the collaborations in energy sector.
4- To increase the flight frequency between two countries.
5- To open of Turkish Cuıltural Center in Kiev.
6- To improve the relations in tourism. 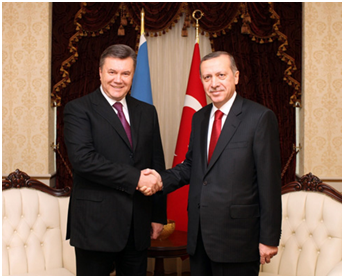 Turkey-Ukraine High Level Strategic Council  has come to the conclusions as planned, covering all the issues above. According to the conclusions of the council meeting, Ukraine and Turkey will work together in ecological coal technologies, natural gas storage facilities, pipe line projects, searching for hydrocarbon sources. Two leader also expressed that Free Trade Agreement will be signed till the end of 2012 and necessary preparations will be accelerated to catch the time plan. On the other hand; to develop the intercultural relations was one of the most important topic in this Council meeting. Turkey will open Yunus Emre Cultural Center in Kiev also providing same conditions for Ukraine to open Ukrainian cultural centers in Turkey.

The other matter under discussion was development of tourism. Last year, more than 600,000 Ukrainians visited Turkey, which has become the most popular travel destination, bringing the sector up in the agenda of the countries’ leadership.

The countries have achieved an agreement on visa free short term travel, which will hopefully boost the presence of Turkish tourists in Ukraine. But the nation still has much to do in this sector, including development of tourism infrastructure such as hotels and transportation, and educating workers for the sector. In this, Ukraine can learn from the Turkish experience, and its Crimea can become as attractive for tourism as Antalya.

This is one of the issues that might come up in discussion again next month, when the Turkish tourism and culture minister visits Ukraine to advance the plans laid out by the strategic council. Improvements of transport connection between the two nations will be another issue. Although the current state of air and sea travel is quite adequate, it will fall behind should tourism and business traffic grows.

But the Turkish side wants to increase the number of flights by two-fold, which will be beneficial for Ukraine as well.  Turkish Airlines is the world’s leading airline brand with flights to 90 countries. More frequent flights to Ukraine mean that travelers from here will be able to reach more destinations in the world, with better connections, with the help of Turkish Airlines.

And, of course, improvements in infrastructure will improve cultural, political and economic ties between the nations.

Turkey and Ukraine are in the similar position when it comes to relations with the European Union. They both have broken-heart feelings. Turkey has had a free trade regime with the EU since 1996, but the debate of full membership is still ongoing.Ukraine is yet to finalize the free trade agreement with the EU amid unresolved issues. In his speech at the  Yalta European Strategy conference in Crimea this month, Erdogan called the EU to adopt a more positive approach to Ukraine in their negotiations.

It seems that Erdogan’s visit to Ukraine was very successful, giving new momentum to the bilateral relations. We can expect to see movement in many directions very soon that will fulfill mutual agreements  with more substance.